There were sheepherders camping in the neighborhood. They had set night watches over their sheep. Suddenly, God’s angel stood among them and God’s glory blazed around them. They were terrified. The angel said, “Don’t be afraid. I’m here to announce a great and joyful event that is meant for everybody, worldwide: A Savior has just been born in David’s town, a Savior who is Messiah and Master. This is what you’re to look for: a baby wrapped in a blanket and lying in a manger.”
At once the angel was joined by a huge angelic choir singing God’s praises:
Glory to God in the heavenly heights, peace to all men and women on earth who please him.

As the angel choir withdrew into heaven, the sheepherders talked it over. “Let’s get over to Bethlehem as fast as we can and see for ourselves what God has revealed to us.” They left, running, and found Mary and Joseph, and the baby lying in the manger. Seeing was believing. They told everyone they met what the angels had said about this child. All who heard the sheepherders were impressed…..
The sheepherders returned and let loose, glorifying and praising God for everything they had heard and seen. It turned out exactly the way they’d been told!

If I had drawn the late night sheep watching shift, it would likely take something major to catch my attention…as I have a hard time staying awake late (as I am an early bird!) I am guessing there was one man at watch, who drew the short end of the stick that night.

And when the angel appeared in their midst, its likely he elbowed his fellow sheep herders, struck dumb with terror.

They all were, according to the story.

Once they heard the good news that the Messiah had been born, the shepherds took off immediately to see if what the angel had told them was true.

They found Jesus, Mary & Joseph in the stable, exactly as the angel proclaimed.

Filled with excitement and wonder, they couldn’t keep the story to themselves. Everyone they met, they told their good news.

If they hadn’t made the journey, they would have missed the main event in human history so far –
God with us.

If they hadn’t seen the angelic sights, they would have missed the opportunity to meet Jesus, and worship Him.

As pretty low in society status, the shepherds were always outside of town, in the wild.

While the town slept, God sent angels to the outskirts, to include them in the story.

We too are invited to come.
Catch sight of the wonder awaiting us.
Rejoice with the angels.
Worship Jesus.
God with us.

“Hark the herald angels sing,
Glory to God in the highest.
O come let us adore Him
under the Star of wonder,
star of might,
on this Holy Night.” 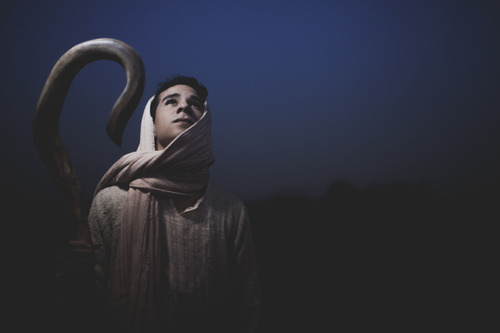